search
Alumni
Academics
Events
Professors
Social
Students
Graduates
Recognition And Delivery Event “Inter Scientific Magazine” Vol. 6- August 2019
The invitation to be part of the 2019 College Board Latin American Congress was held yesterday Wednesday, October 2, 2019, in which Ms. Romina Maria Soto Balseiro who was a special guest and is recogn...
By: Ruben Quiroz 04/Oct/2019 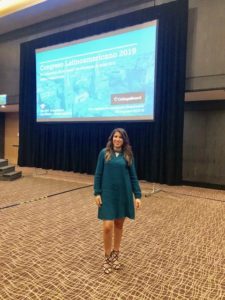 The invitation to be part of the 2019 College Board Latin American Congress was held yesterday Wednesday, October 2, 2019, in which Ms. Romina Maria Soto Balseiro who was a special guest and is recognized with her semblance thus emphasizing her career development professional, academic and social community at its undergraduate level and now at the graduate level it is for this reason that at the opening of the event as a graduate of her Alma Mater at the university level (Bachelor of Natural Sciences) of the Inter-American University of Puerto Rico, Campus of Arecibo and representing his current Alma Mater as an active student of the Universidad Autónoma de Guadalajara of the International Program of Medicine is mentioned in such a great event at the systemic level that takes place at the Guadalajara headquarters, Jalisco, Mexico.
The “Inter Scientific Magazine” Vol. 6- August 2019 of the Inter-American University of Puerto Rico, Arecibo Campus in which the student manages to publish her research at the doctoral level together with her mentor is presented to the congress Dr. Olivia Torres Bugarín representing the Academic Faculty of the International Program who witnessed the event.
As part of his representation at the congress as a student of the Faculty of Medicine of the UAG International Program he delivers to the Rector of the UIPR, Arecibo Campus Dr. Rafael Ramírez Rivera, a present on behalf of the honorable Rector of the UAG Mr. Antonio Leaño Reyes, along with Mr. Ricardo del Castillo, Dean of the International Program, thus fostering future links in the world of research science between Puerto Rico and Mexico.
It was more than an honor, a pleasure and a privilege to be able to witness such an enriching experience and in turn dignify the UAG, School of Medicine.
Grateful for the opportunity I was given to represent the UAG, School of Medicine of the International Program, the academic faculty and my fellow students who are tomorrow’s future doctors. Respectfully, Romina M. Soto Balseiro Med Student, Universidad Autonoma de Guadalajara, School of Medicine 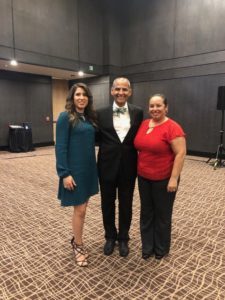 Parkinson’s Society adds UAG Alumni to Board of Directors

Upstate Parkinson’s Society (UPS) has announced that Kathleen V. Woschkolup, M.D., has accepted a position on its board of directors as medical director and vice chair.

This UAG Alumni OBGYN helped deliver a baby as Hurricane Fiona made landfall in Puerto Rico!
'We, as women, take care of basically everything and everybody.'

The orthopedic surgeon seeks to improve the quality of life of patients in Puerto Rico with the latest advances in hip reconstruction treatments.