The Universidad Autónoma de Guadalajara (UAG) awards this recognition to graduates who have excelled in their professional, humanitarian, and educational work. 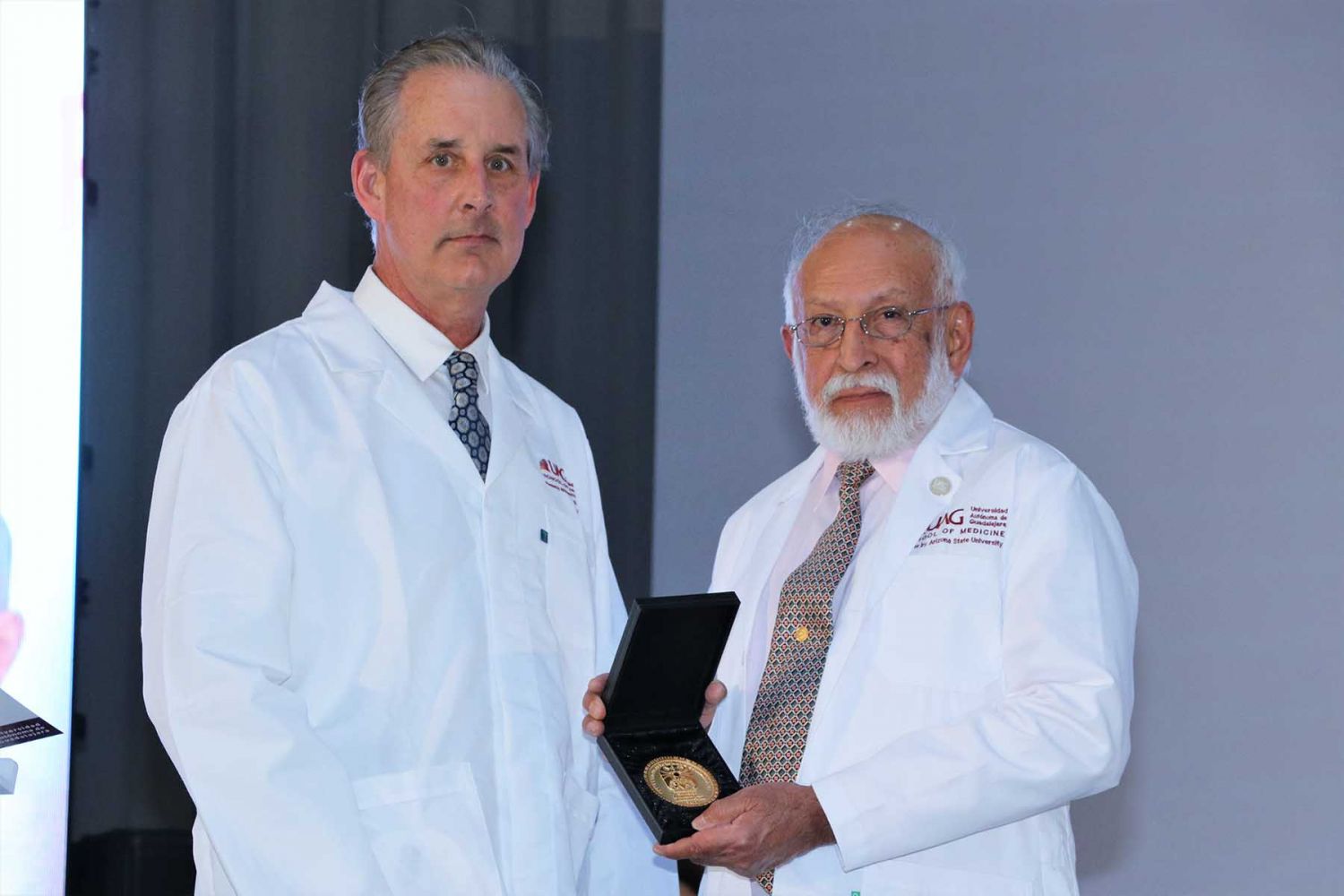 The award was bestowed during the White Coat Ceremony for the incoming students of the International Medicine Program which Dr. Monsiváis Franco attended as a special guest.

The award was presented by Dr. Christopher A. Reeder, Dean of the UAG School of Medicine, who in his remarks emphasized how the "Antonio Leaño Álvarez del Castillo" Award is the highest distinction that the institution can award to its distinguished alumni.

"It is an honor for me, on behalf of the Rector of UAG, Lic. Antonio Leaño Reyes, and the International Medicine Program, to present him with the Antonio Leaño Álvarez del Castillo Award for his outstanding career and service to society, " said Dr. Reeder.

Dr. José Monsiváis thanked the Institution for having granted him this distinction in which his academic and professional work as a UAG Alumni was recognized.

Dr. José Monsiváis Franco was born in Aguascalientes, Mexico, and studied Medicine at UAG with the 1963-1971 generation. Throughout his career, he has obtained a Specialty in Surgery and Orthopedics from the Harlan Appalachian Regional Hospital of Kentucky. He also received a scholarship for Reconstructive Microsurgery of the Hand from the Department of Orthopedics at Duke University in North Carolina.

He has offered his plastic, orthopedic, and hand surgery services at the Walter Reed National Military Medical Center in Washington D.C.

He has held positions as a Surgeon General in the Middle East, assisting in Iraq, and as a clinical associate professor in the Department of Orthopedics and Rehabilitation at Texas Tech Health Sciences University.

Since 1992, he has been Director of the El Paso Hand and Microsurgery Center and Clinical Professor of the Department of Surgery at Burrell College of Osteopathic Medicine in Las Cruces, New Mexico. Dr. Monsiváis has interests in Del Sol Medical Centers, Las Palmas, Providence Memorial Hospital, Foundation Surgical Hospital, and SurgCenter of West Texas, all located in El Paso, Texas.

The Universidad Autónoma de Guadalajara (UAG) awards this recognition to graduates who have excelled in their professional, humanitarian, and educational work.

UAG School of Medicine Graduates the Class of 2022

A generation of students from the United States and Puerto Rico finished their studies at the UAG International Medicine Program.

Dr. James T. D’Olimpio: From Boston to Guadalajara and Back Again
During my time in Guadalajara in the 70s, I learned a new language and had the opportunity to experience a new culture while having an incredible time.